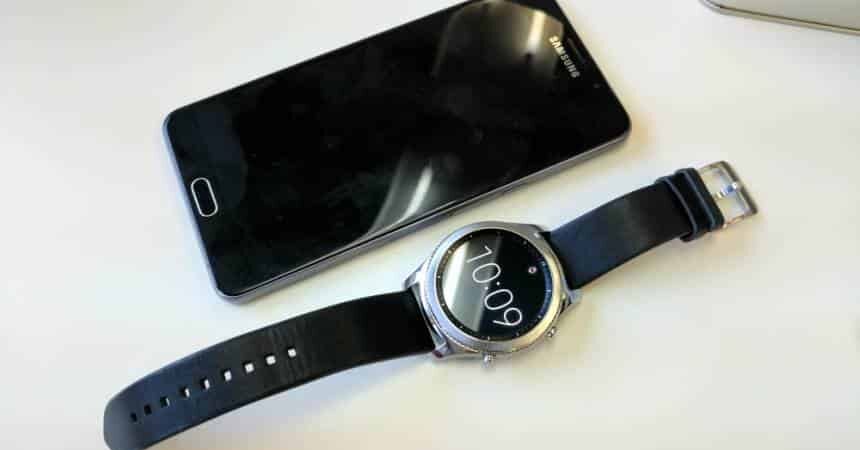 Olhar Digital > News > We tested it: Gear S3 is the best smartwatch in Brazil, which doesn't mean much

We tested it: Gear S3 is the best smartwatch in Brazil, which doesn't mean much

Few categories of electronics can be as confusing as that of smart watches - or smartwatches. The first good models of this line started to appear in 2014, led by Apple Watch and devices running Google's Android Wear.

Samsung also started using Android Wear, but soon expanded to a proprietary software solution and introduced the Gear S. to the world. Today in its third generation, the Gear S3, the Korean brand demonstrates that it has learned a lot from the mistakes of the past and keeps improving.

Announced in Brazil in December last year, the Gear S3 costs R $ 2.200 (price suggested by Samsung) and was sent to Olhar Digital for a few test days. Does the device outperform predecessors and competition? Is it worth the high price? Is any smartwatch in this world worth so much money? This is what you will discover in the paragraphs below.

For you who don't know what a smartwatch is, here's a quick summary: it's a wearable (a wearable device) that you put on your wrist and sync with your smartphone. From it, it is possible to have quick access to notifications and some basic cell phone functions, such as replying to messages and even answering calls, depending on the model.

What happens is that, visually, there is almost nothing that differentiates a smartwatch from an ordinary watch. The Gear S3 is a good example of this case. The design applied by Samsung is simple, but very bold. It looks like a “normal” watch, but it has several characteristics of a luxury product, aimed at the executive audience.

The version we tested of the device is the Classic, with leather strap (in two sizes for different users' wrists). There is another version, called Frontier, with a rubber bracelet and a more “sporty” texture, aimed at another audience. The watch itself, in both versions, is made of steel. 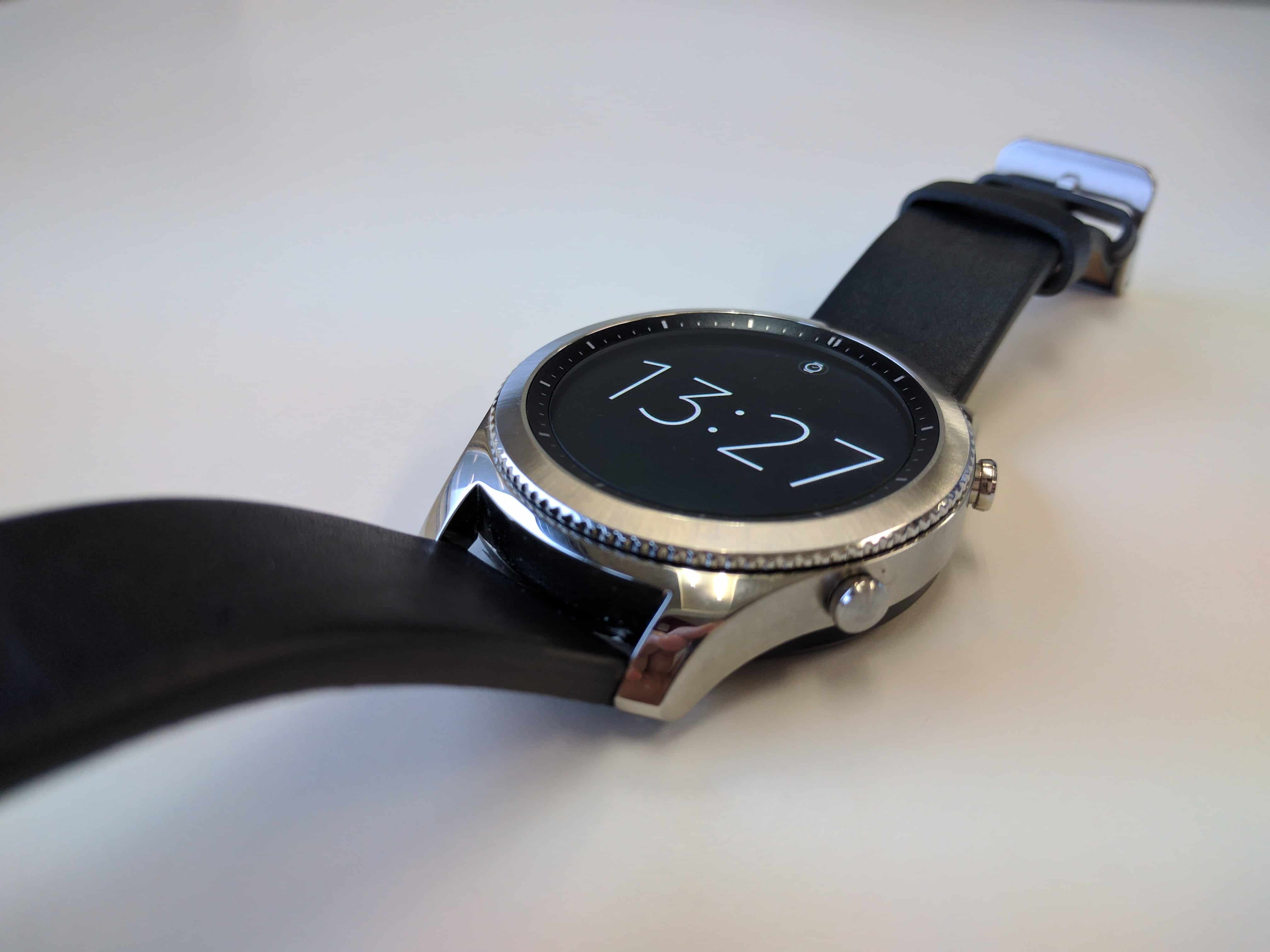 There is no way to go much deeper than that. The Gear S3 is a beautiful and discreet watch, without any extravagance. It's not quite as minimalist as Motorola's Moto 360, but it also doesn't try to pass itself off as a wrist computer. The best description for the Gear S3 is perhaps the word "elegant".

Carrying a miniaturized smartphone on your wrist means having even more intimate contact with technology than what you have with your cell phone or PC. This also means that the user experience needs to be as natural and intuitive as possible, so that the user does not feel like a cyborg when touching the watch on the arm.

Although every smartwatch is a nightmare in that sense, until Samsung manages to put some very interesting ideas on the Gear S3. The main one is the steering wheel around the screen, which allows the user to interact with its features in addition to the touchscreen. It is the same interaction mechanism used in the Gear S2, and it comes back here with the same delicacy and precision.

It makes a lot of sense for a smartwatch to use its own round shape as a form of navigation. It is the most intuitive and natural interaction you can imagine having with the watch. It causes some discomfort to have to use the side pins as cursors, as the Apple Watch does, as it does not seem so “organic” movement.

There are buttons on the side of the Samsung device that, from time to time, need to be used to perform certain tasks. At times, using these buttons can seem confusing, and it takes some time for the user to memorize which one does what. But this is just a setback in a very well-built user interface.

Another feature that makes the experience intuitive is the Super AMOLED “always-on” screen, which is in a low-light state when the user is not looking and lights up when it detects the movement of the arm to take the watch to the eye height. However, the feature does not work as precisely as possible. 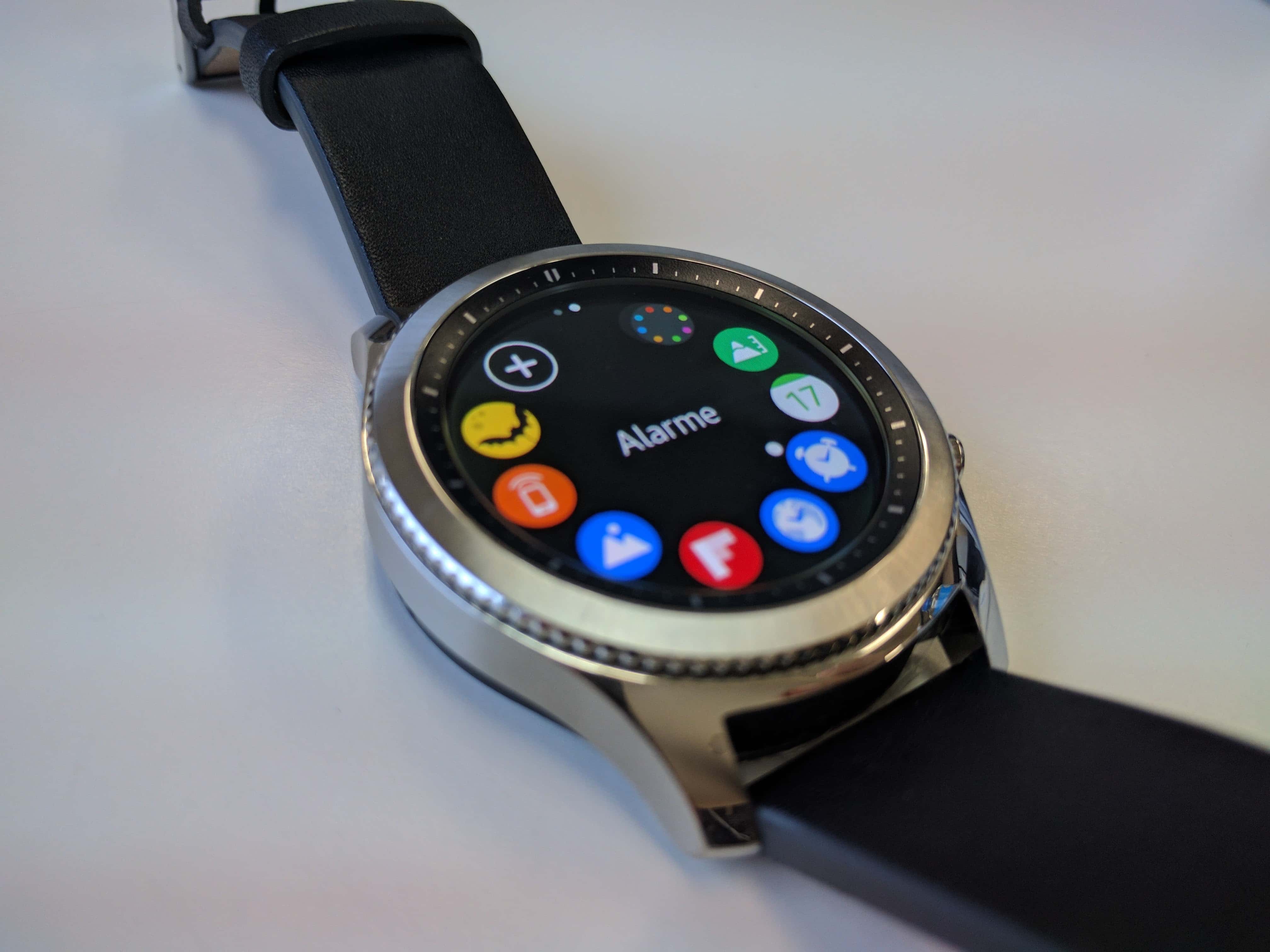 More than once, I had to raise my arm, lower it again and raise it again, sometimes even shaking my wrist, so that the screen would light up and I could see the time. A sign that the movement sensors inside the watch are not exactly perfect, which can make the experience somewhat frustrating in everyday life.

The screen, by the way, has good resolution and, like its predecessor, the Gear S3 also manages to keep the content of the screen readable even in strong natural light - at least when the screen is active. In low light mode, it is very difficult to discern digital hands and numbers.

Finally, the Gear S3 is IP68 certified, which ensures that it is almost completely waterproof. We say "almost entirely" because Samsung does not recommend that you use it for swimming or diving, especially not in salt water. Anyway, the watch promises to hold up to 1,5 meters of water for up to 30 minutes, which we were able to prove in our tests.

Let's go to the numbers offered by performance analysis applications. The Gear S3 has a 1,0 GHz dual-core processor, 768 MB of RAM and an incredible 4 GB of internal storage. The leap in relation to S2 is clear and very welcome, making S3 work much better independently than just resonating the cell phone content.

These 4 GB of internal space can be used to install new applications, but there are not many options in the Samsung store. The big problem with Gear S3, in this sense, is its operating system. The software, based on Tizen (from Samsung itself), is much more closed and bureaucratic than Android Wear, used by some competitors. 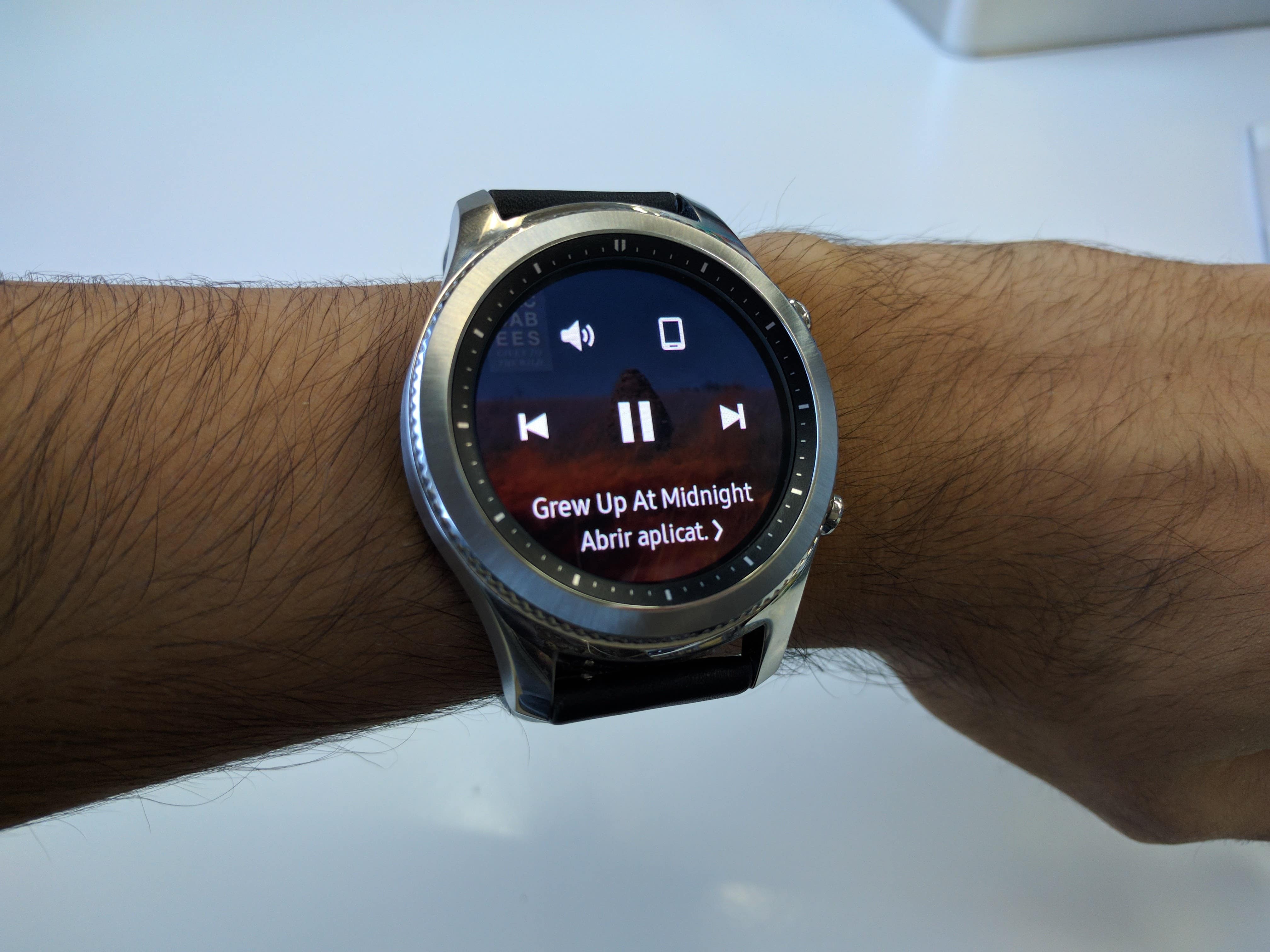 Pairing the watch with an Android phone that is not a recent top of the line Samsung is a somewhat thankless task. It is necessary to install no less than three Korean apps just so that the two devices can talk more clearly. On a Galaxy S7, for example, two of these apps are already installed at the factory.

That said, the Gear S3 even facilitates the “big” job of taking your phone out of your pocket to check a notification (we'll talk more about this “torture” below). There is little delay between the arrival of the alert on the phone and the watch, and raising your arm to activate the screen gives immediate access to the content of messages from WhatsApp, Messenger or SMS.

What the Gear S3 does not do well is to offer a minimally satisfactory response mechanism to these messages. Like any other smartwatch, Samsung's smart watch has an almost mind-boggling keyboard. The audio detection system also translates our responses aloud very poorly, and not even taking calls - doing that famous secret agent pose bringing the wrist close to the mouth - is the best experience.

Only short answers (“yes”, “no”, “maybe”) are easily accessible. This problem is not unique to the Gear S3, of course, but little effort is seen from Samsung to try to fix it. The good thing is that the smartwatch bets many of its chips on the independent use of the cell phone, especially in monitoring physical activities, when it stands out.

In addition to traditional step counters, calories, sleeping hours and heart rate records (which work well, by the way), the Gear S3 comes with support for Wi-Fi networks. This means that many of its basic functions, such as consulting the map or take a look at the weather forecast, work even away from the smartphone.

Although it is not completely independent of the smartphone, it is a slight degree of welcome autonomy. It helps that the device's battery (which has 380 mAh of power) has a reasonable duration: three to four days away from the outlet. Wireless charging via the dock that comes with the smartwatch, however, is slow as expected: as if it were a cell phone from three years ago, the Gear S3 takes almost two hours to go from 0% to 100%. 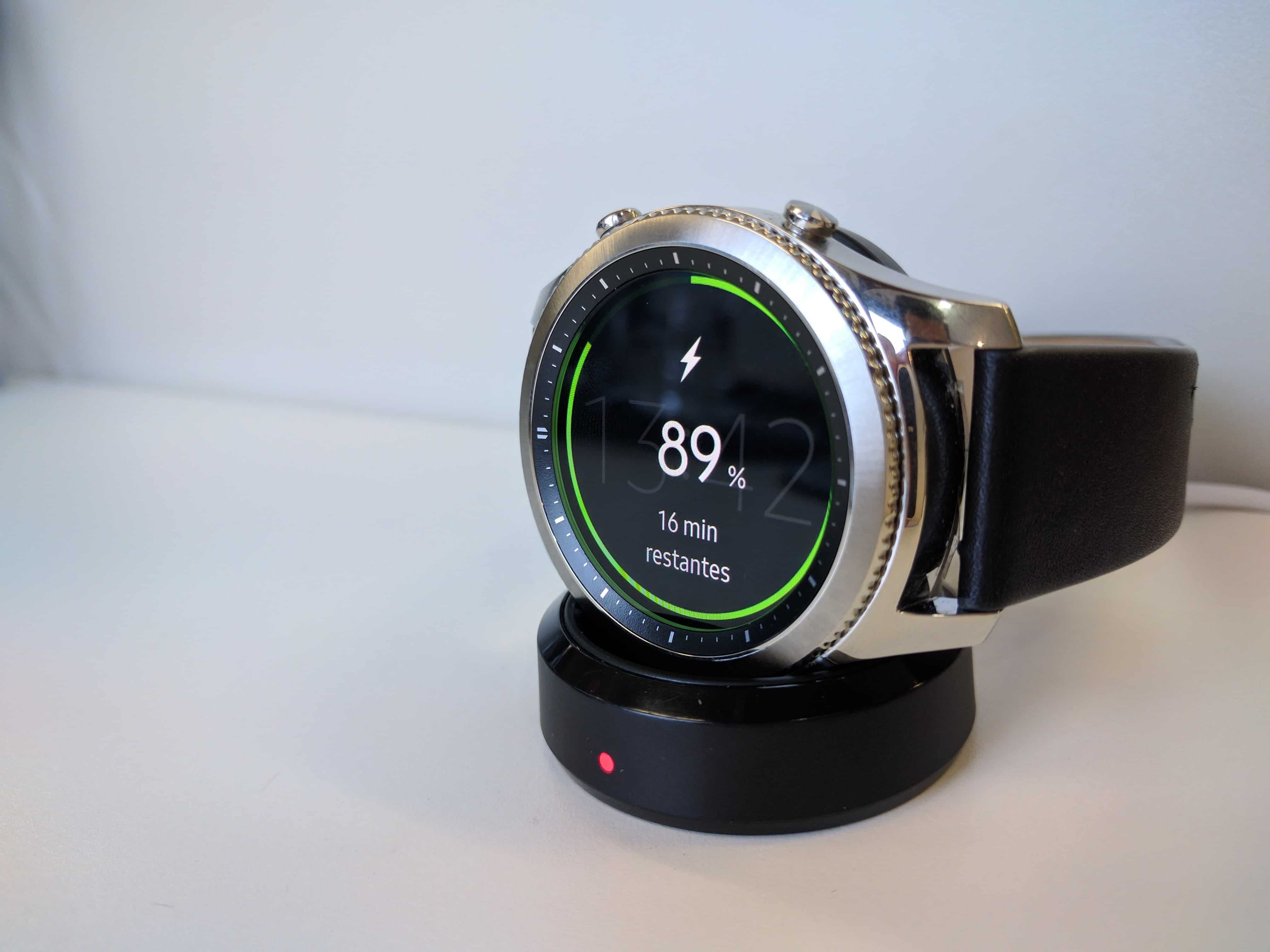 The Gear S3 is clearly one of the best - if not the best - smartwatch on the Brazilian market. Which doesn't mean much, actually. However, more complete, dynamic and intelligent, the device is just a watch with the same functions as a smartphone.

To date, the technology industry does not seem to have found a clear justification for smartwatches. As we said before, its main function is to shorten the journey from the user's hands: you don't need to take your phone out of your pocket to see who's calling you on WhatsApp, just raise your arm.

There are those who argue that doing this is safer than leaving your smartphone on display, but the chances of someone stealing a cell phone from your hand are almost the same as that of a thief asking for your watch when he realizes that he lights up the screen alone and has touch-sensitive controls.

All this for R $ 2.199, the price of a great intermediate smartphone. Although it does not seem to compensate, smartwatches managed to win a (very small) share of the consumer audience. If even knowing all this and having a different opinion you want to buy a smart watch, the Gear S3 is an option that leaves nothing to be desired.

No complications: learn your first steps in Excel