Meteorites found on Earth are fragments of the same 'baby planet'

Snakes diet can affect how poisonous they are, ...

Before the planets of our Solar system emerged, we had planetesimals, small rocky bodies that clustered and formed the planets. Scientists believe that most of the meteors that hit the Land they are fragments of these “planetary babies”.

Scientists also believe that these planetesimals have completely melted, very early in their history, or that they have turned into little more than "piles of rubble". However, a family of meteorites found in different parts of the world seems to come from a planetesimal that contradicted this trend.

New research has shown that these meteorites appear to belong to the same parent body, providing evidence that the rocky body from which they came was both melted and broken in a pile of rubble. A real puzzle for researchers.

The study presenting these results was published in the journal Science Advances and signed by Clara Maurel, a graduate student at the Department of Earth, Atmospheric and Planetary Sciences (EAPS) at MIT.

Our meteorite classification system assumes that no parent body can be the source of chondritic (melted) and achondritic (non-melted) meteorites. This is part of our understanding of planetesimal formation.

According to the models, they form almost instantly, which prevents them from having this “double life”. There is a chance that planetesimals are differentiated, with melted and non-melted regions, but proving this has proved difficult. At least so far.

Maurel's study points out that planetesimals may have more diversity than we imagine. According to the team of scientists, the parental body of a rare group of meteorites found on Earth must have been differentiated, with regions melted and not melted. It also had a liquid metallic core, which produced a powerful magnetic field.

This parental body also shows that our understanding of planetesimals and their origins is still small. Some recent proposals suggest that they can take more than a million years to form, and these results support this theory.

In that period, according to the authors, "this could have resulted in partially differentiated internal structures, with individual bodies containing iron cores, achondritic silicate mantles and chondritic crusts". The key was to find meteorites that would prove this process, the so-called IIE irons.

Its history begins in the early days of the Solar System, about 4,5 billion years ago. In the beginning, our system was just a whirlwind of gas and dust. Over time, it cooled. Thus, the solid matter began to collide and merge, creating the planetesimals. They are the source of most meteorites that hit Earth, and most evidence shows that they came from chondritic or achondritic bodies.

Melted or not, scientists believe they formed very early, and very quickly - just a few million years. If they were formed early enough, they would have radiogenic elements that generate heat as they decay to more stable elements. Radiogenic elements were more common in the early Solar System, and the heat of their decomposition could melt the entire planetesimal. 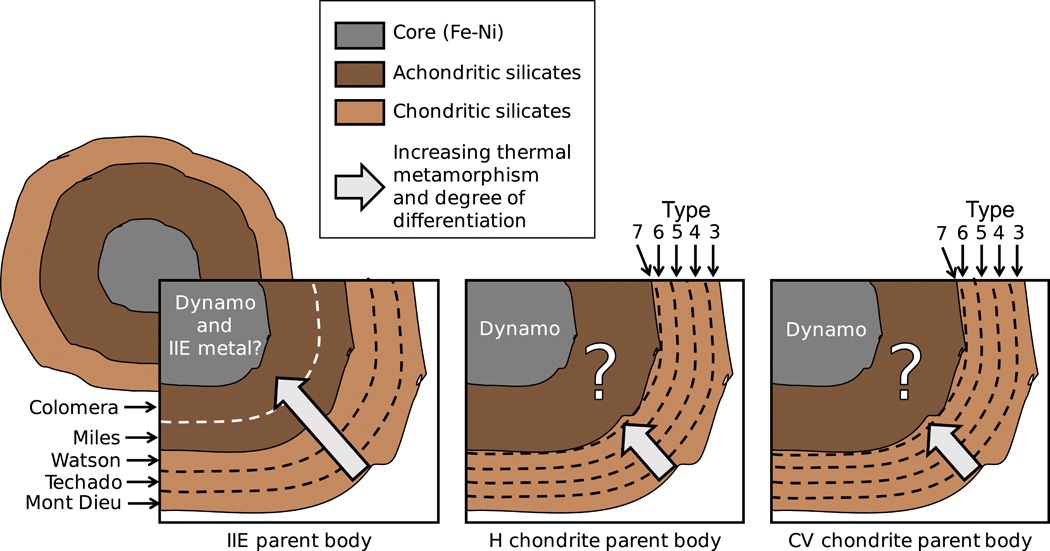 In that study, the team focused on the iron IIE meteorite family, which they claim is evidence of a planetesimal with a magnetic core. The team became interested in this family precisely because it presented evidence of both situations.

The parent body of these meteorites probably had a solid crust and a liquid mantle, just like the Earth. But the team wanted to know if, like our planet, the planetesimal had a metallic core. The Earth's cast iron core generates a powerful magnetic field. Was it the same with the planetesimal? Was there evidence of this within the meteorites?

When some molten materials solidify in the presence of a magnetic field, they line up with the field like a compass needle. Some minerals maintain this characteristic for billions of years.

To find out, scientists analyzed samples of IIE iron meteorites at the Lawrence Berkley National Laboratory, using the lab's Advanced Light Source (ALS), which generates X ray that interact with mineral grains. They were looking for a mineral made of iron and nickel that interacts with X-rays in a certain way. On a nanometric scale, this interaction can reveal the magnetic orientation of minerals.

And, as the team suspected, some grains were magnetically aligned. This is evidence that they have cooled in a magnetic field. According to the research, the magnetic field of the planetesimal may have been as strong as that of the Earth.

The analyzes showed that the origin of the magnetic field was a liquid metal core. According to the team's calculations, the nucleus was probably several tens of kilometers wide.

According to Maurel, this type of planetesimal takes longer to form - several million more years. This is much more than current models show.

But in which part of the planetesimals did these meteorites form? They could not be from the nucleus, since they were solidified in the presence of a magnetic field, which in turn only exists as long as the nucleus is in a liquid state.

After simulating different scenarios, they got a possible answer. If a planetesimal with a fused nucleus collided with another object, the material could be dislodged from the nucleus. Thus, it would get closer to the surface, where it would solidify.

Graph shows results of a collision in a differentiated planetesimal. The core material rises to the surface after impact. Image: Maurel et al., 2020

“Later, this body will go through many other collisions until the final collisions that will put these meteorites on Earth's trajectory,” says Maurel.

For now, it is not yet known how common this type of planetesimal is. Whatever the answer, we will probably find it in the asteroid belt, home to countless primordial rock objects.