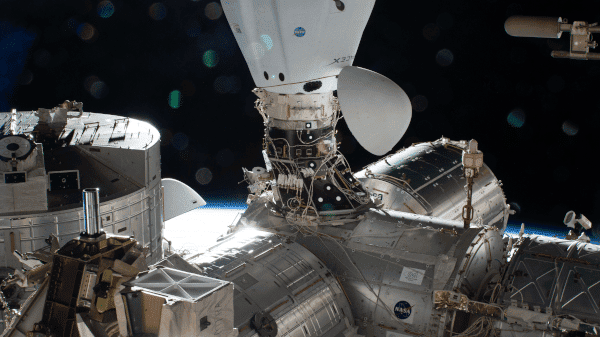 After Apple, Google is sued to block Telegram on ...

SpaceX's Dragon CRS-21 capsule will leave the International Space Station (ISS) early on Monday. Coupled to the ISS since December 6, it will split at 10:25 am (Brasília time), with live broadcast by Nasa TV.

Unlike the Cygnus, from competitor Northrop Grumman, the Dragon return intact, landing in the ocean with the help of parachutes. This makes them ideal for bringing biological samples back to the planet and the result of experiments conducted on board the ISS.

Pioneering mission for SpaceX and NASA

CRS-21 was a pioneering mission for both SpaceX and NASA. It was the first flight of an updated Dragon, with 20% more space for cargo on board and a system that allows it to automatically dock with the ISS. Before that, the spacecraft maneuvered to a nearby point and was captured by astronauts at the station using the Canadarm2 robotic arm.

It was also the first time that the ISS hosted two Dragon simultaneously: the Crew Dragon used to transport the mission astronauts. Crew-1, launched by SpaceX in mid-November, is also attached to the station and will remain there for at least another three months.

As it took off in December, CRS-21 was also used to carry the astronauts' Christmas dinner. The menu included gratin potatoes, roasted turkey, macaroni and cheese, biscuits and vanilla cappuccino.

Another novelty in this mission is the landing site: previously the Dragon landed in the Pacific Ocean, but the CRS-21 will land in the North Atlantic. This will allow samples and experiments on board to be delivered to scientists in record time, just four hours after landing.

The next manned takeoff is scheduled for March, taking American astronauts Shane Kimbrough and Megan McArthur, as well as Japanese Akihiko Hoshide and Frenchman Thomas Pesquet on Crew-2. The capsule used will be Endeavor, which took astronauts Bon Behnken and Doug Hurley on the historic Demo-2 mission in May this year.

After Apple, Google is sued to block Telegram on ...

Viih Tube has greater digital popularity than Projota and Fiuk

Motorola Edge S is the first cell phone on the market with ...

STJ revokes arrest of man recognized by victims through ...