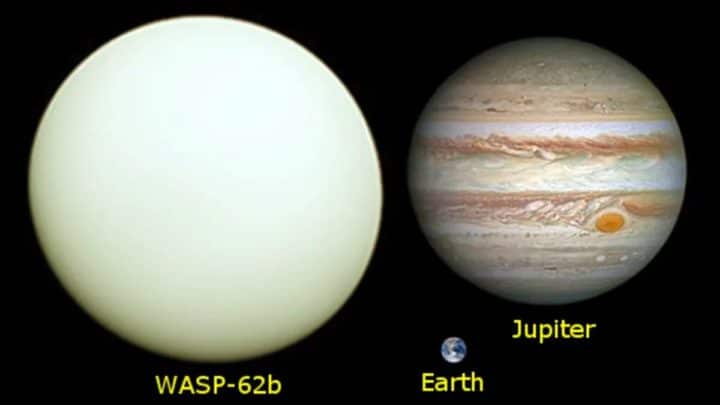 Planet where a year lasts four days is discovered by astronomers

American astronomers have discovered a rare exoplanet with many similarities to Jupiter, but without clouds or fog in the atmosphere. Named WASP-62b, the celestial body is 575 light years away from the planet Land, in the Dourado constellation and orbits its host star once every 4,4 days, at a distance of 0,06 AU (Astronomical Unit).

Cloud-free exoplanets are extremely rare, so much so that astronomers estimate that less than 7% of exoplanets have clear atmospheres. The only one found before the WASP-62b was the WASP-96b, discovered in 2018.

“Their rarity suggests that they formed differently than most planets. The clear atmospheres also make it easier to study the chemical composition of planets, which can help to identify what a planet is made of, ”explained Munazza Alam, an astronomer at Harvard & Smithsonian Center for Astrophysics.

WASP-62b was first detected in 2012 by WASP (Wide Angle Search for Planets South), an international academic organization that performs automated searches for extrasolar planets using the astronomical transit method. Now, however, it has become possible to know that the star has approximately half the mass of Jupiter.

The observation of WASP-62b was possible through NASA's Hubble space telescope, via spectroscopy, a study of electromagnetic radiation to help detect chemical elements.

“I admit that at the beginning I was not very excited about this planet. But as soon as I started examining the data, I was excited, ”said Munazza Alam. Astronomers specifically monitored the planet as it passed three times in front of its host star, offering visible light observations, which can detect the presence of sodium and potassium in a planet's atmosphere.

Although there was no evidence of potassium, the presence of sodium was remarkably clear. Astronomers were able to visualize the complete sodium absorption lines in their observations.

Clouds or fog in the atmosphere would obscure the complete sodium signature and astronomers can usually only see small signs of its presence.

“In fact, we cannot see these planets directly. It's like looking at a firefly near a pole. We are collecting all this information about the planet's atmosphere from what we call combined light observations, which means that we are looking at the light of the star and the planet, ”concluded Munazza Alam.

Tesla sues former employee and accuses him of stealing code from ...

US kidnapped woman found thanks to Apple Watch