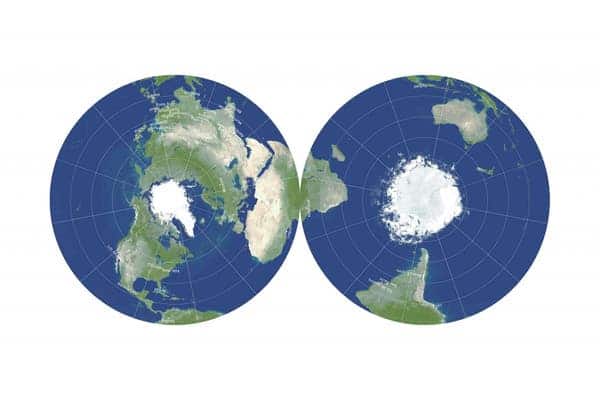 Cartography is not the science that evolves faster, which is explainable, since the world map models that we have, in a way, fulfill their role well.

However, undeniably, they are very old. To give you an idea, the most popular model is that of Mercator, which was proposed in 1559, but there are other more recent ones, although less popular. The 1921 Winkel Tripel, which is widely used by publications such as the National Geograpgic, or the Dymaxion, created in 1943.

But Professor John Richard Gott, from Princeton University, in the United States, want to change this scenario and proposed a new world map model.

The academic's objective is to try to correct some existing distortions in the current models, such as Greenland and the African continent with the same size or the state of Alaska larger than the whole of Mexico, for example.

Side A and Side B

These distortions happen for a simple reason, the world map is a flat projection of a planet that is round. But Professor Gott's idea is just as simple, a circular map in front and back, as if it were a vinyl record.

And just as in the old music players, the model proposed by Gott also has a "side a" and a "side b", which are the northern and southern hemispheres, respectively. In other words, it is an emptying of the 3D terrestrial globe in two dimensions.

John Richard Gott has been working on the model since 2006, together with David Goldberg, a cosmologist at Drexel University in Philadelphia. They based the Winkel Tripel model, which showed the least distortions within a system created by the two.

One goal of scholars was to end what they called "topological violence", a mathematical incision, often going from pole to pole in the Pacific. To solve this, the two made the model go beyond the edge.

However, for some map scholars, such as the Hungarian Krisztián Kerkovits, this model ends up with one of the main differentials of a world map, which is the possibility of seeing the entire planet on a single page.