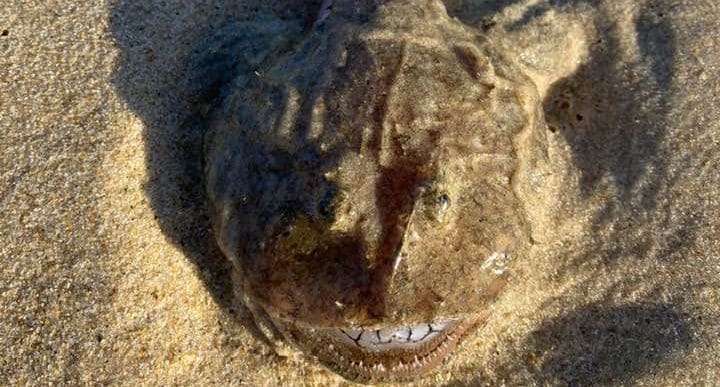 A tourist who was on the beach at Noosa North Shore in Queensland, Australia, shared a photo on Facebook that gave a lot to talk about. In the click, it is possible to notice a mysterious flat-headed fish covered by sand and with apparent scary teeth.

Some netizens pointed out that the animal was a flathead, a species of fish that has the same shape as the head and is quite common in Australia.

Others pointed out that the animal was a stargazer, a creature that shoots poison through two spines located on each pectoral fin. In addition to the toxin, the spines are also capable of producing electricity, which generates a severe shock to the victims. This unfriendly species can be found on the south side of Queensland and across the south coast of Western Australia.

Maculumie University Department of Biological Sciences professor Culum Brown confirmed some of the speculation and told the Yahoo News Australia that the mysterious fish really looks like a stargazer.

Brown also said he was startled by the size of the animal and that this may mean that he is of another species called anglerfish, which is common in the New Zealand. However, the professor says the appearance of the creature on the south coast of Australia is not common.

The difference is that, despite the frightening appearance, the monkfish is considered a delicacy in Norwegian cuisine. Due to its ugliness, many fishermen refused to bring the fish on board and called it "sea demon".

But nowadays, the animal even has admirers for its delicious flavor and explosion of nutrients. The creature comes to be known as one of the holy protectors of diabetics, considering that its pancreas was one of the first sources of insulin manufactured. Monkfish is also famous for being rich in protein and vitamin A.

So, what do you think? Does this mysterious fish look more like the poisonous stargazer or the delicious monkfish?

'Matrix 4': trailer shows the resurgence of Keanu Reeves as Neo

'Mission: Impossible 7' will have actors from 'Game of Thrones' and 'Stranger Things' cast