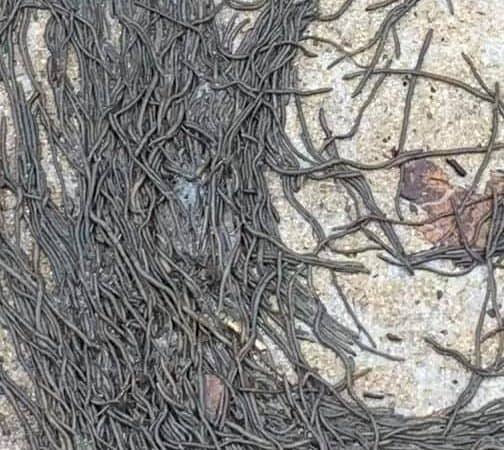 Centibilionários: Co-founders of Google join the team of hyper ...

A “worm tornado” was spotted by a Hoboken resident in New Jersey, United States, and sent to Tiffanie Fisher, a member of Hoboken City Council, who shared the photo on your account No. Facebook and wrote: "Clearly, earthworms come out after the rain, but this is something I have never seen!"

The night before the video, Hoboken recorded heavy rains and “it would have resulted in a lot of earthworms coming out of the ground in search of air,” said Harry Tuazon, a doctoral student in the Georgia Tech Graduate Program in Interdisciplinary Bioengineering, to the Live Science.

"This form of tornado is really interesting," said Kyungsoo Yoo, a professor in the Department of Soil, Water and Climate at the University of Minnesota. He studies how invasive earthworms transform forest ecosystems, and although they are known to emerge en masse from the soil after rain, Yoo had never seen them spiral before.

According to "Worm Blobs", a comic book created by the Bhamla Laboratory of the Georgia Institute of Technology's Biomolecular and Chemical Engineering School and illustrated by artist Lindsey Leigh, waterworms such as Lumbriculus variegatus can form a huge living node known as bubble of up to 50 thousand units when threatened by drought conditions. "A compact bubble of worms is less likely to dry out than a worm alone, and the worms pull and push to move the bubble," wrote the Bhamla Lab researchers in the comic.

The leader of the laboratory, Saad Bhamla, assistant professor at Georgia Tech, suggests that sudden changes in soil water in combination with the shape of the landscape could explain the appearance of the “worm tornado”. However, he does not know what the species of worms are from the photos.

Earthworms breathe through the skin and can drown

According to a study by the University of Wisconsin-Madison, earthworms breathe through the skin, so when heavy rain drenches the soil with water, they create tunnels to the surface or can drown. The researchers reported in 2010 in the International Journal of Behavioral Biology that earthworms are typically solitary, but sometimes form herds when they are on the surface. They meet in groups and communicate with each other about where to move.

“Earthworms of the species Eisenia fetida form clusters and influence each other to select a common direction during their migration and do so using touch rather than chemical signals. This collective behavior can help earthworms to survive environmental threats, such as floods or arid soil, and can also be a defense strategy against predators or pathogens, ”explains the study.

In 2015, guards at Eisenhower State Park in Denison, Texas, filmed huge masses of worms writhing on a road. “Recent floods may have caused this grazing behavior,” wrote the park's representatives in the YouTube video description. Watch: