Olhar Digital > Science and Space > Learn all about the Starlink project

Learn all about the Starlink project

Elon Musk already revolutionized the auto industry, with the Tesla, and aerospace, with the SpaceX. Now his eyes are on telecommunications with the Starlink project, which aims to offer fast access to the internet anywhere on the planet.

It is an ambitious plan, which requires the production, launch and operation of satellites on an unprecedented scale and in a short time. But it is also a plan that is fast becoming a reality, with more than 80% of the number of satellites needed for global coverage already in operation.

Come with us, and learn more about this project that can change the way we communicate.

Starlink is the name of a SpaceX project to offer fast internet access anywhere in the world via satellites. Unlike current satellite Internet services, which cover specific regions, Starlink's goal is to offer global coverage, saturating a low orbit with enough satellites to serve every corner of the planet. Illustration of the Starlink constellation around the Earth. Source: SpaceX

How many satellites will be used?

SpaceX is approved by the FCC (US telecommunications agency, similar to our Anatel) to operate 12 satellites. They will be grouped in layers (“shells”, in English) around the planet, and according to the company's CEO, Gwynne Shotwell, 1.680 satellites in the first layer will be needed to offer global coverage.

Starlink currently has 1.380 satellites in operation at an altitude of 550 km. After completing the first layer, SpaceX plans others, at 384 km and 1.200 km in altitude.

To give you an idea of ​​the scale, already discounting Starlink's satellites, there are currently around 2.300 others in orbit. In other words, the company expects to operate almost twenty times more satellites than the total that currently exists around our planet. Set of 60 Starlink satellites about to be placed in orbit. Source: SpaceX.

SpaceX launches 60 satellites at a time on board a rocket F. The amount is limited only by the space in the fairing that protects them in the nose of the rocket. The company has already indicated that it is studying ways to launch more satellites for each mission, either with new fairing models, with more space or with launches on board the Falcon Heavy, more powerful rocket than Falcon 9.

Is it true that you can see the satellites with the naked eye?

Yes it's true. Especially in the days after launch, when they are still in a lower orbit and their panels reflect more sunlight. They appear in the sky as a string of stars moving quickly, usually around sunset or at dawn. Starlink satellites look like dots moving rapidly across the sky, and are often mistaken for UFOs. Source: Chris Aotearoa

Because of this astronomers protested against the project, claiming that it could prevent astronomical observations on the ground. In response, Musk said that future satellites would have a kind of “visor” to reduce its brightness.

57 of these satellites, dubbed by SpaceX “VisorSats”, were launched in early January 2021. Observations made by SpaceX claim that they are only 31% as bright as the original models.

If you want to try to see Starlink satellites in the sky, you can use apps like Heavens Above (for Android) or Sky Live (for iOS) to know when they’ll be passing over your region and where to look.

The Starlink network was designed to offer download speeds of up to 1 gigabit (128 megabytes) per second. Obviously the speed, in practice, will depend on factors such as the number of satellites in orbit, the number of clients connected to the network, etc.

Originally, users of the beta version of the service had download speeds of around 150 megabits per second (Mb / s). In February, Elon Musk promised "Double" the speed, and quickly fulfilled his promise.

In early March 2021 users of the beta version of the service reported a “big jump”In its download speed, which in some cases reached almost 400 megabits per second. However, the speed gain came at the expense of greater instability in connection to the network SpaceX guarantees that connections via Starlink will be fast enough for online games. Source: Pixabay

More important than access speed is latency, or the time it takes for data to travel from the satellite to you. In a traditional satellite connection, it can reach 500 or 600 milliseconds, which can make use of videoconferencing or online games unfeasible. That's because the satellites are in geostationary orbit, 35 km from the planet's surface.

Starlink plans to solve the problem by placing its satellites much closer to the planet, at an altitude between 340 and 1.200 km. The goal is to have a latency of less than 20 milliseconds, not unlike a current domestic broadband connection.

How much will it cost?

SpaceX has not yet officially started operations, but interested parties can now sign up on the company's website for beta access to the network. The monthly fee costs US $ 99 (R $ 550) per month, plus US $ 499 (about R $ 2.800) for the purchase of access equipment (antenna, tripod and router).

It may seem high for those who are used to the price of broadband connections via cable or fiber optics in large cities, but remember that SpaceX's focus is initially on rural regions and hard-to-reach areas, where there is usually only one provider service with low speed and high price.

Starlink's prices put the service in a competitive position compared to competitors such as ViaSat (from $ 30 to $ 150 per month for connections from 12 Mbps to 100 Mbps) and HughesNet, which charges from $ 60 to $ 150 monthly for 25 Mbps connections.

What equipment will be needed?

The connection to the network is made through ground terminals, to which your devices will be connected. In the same way that a computer or smartphone connects to a router to be able to access the internet.

These terminals can be installed anywhere, as long as they have a clear view of the sky. They consist of a small satellite dish, “the size of a medium pizza box” and a preconfigured router.

Starlink's antenna is “the size of a medium pizza box”. Credit: darkpenguin / Reddit

Installation is simple: just mount a tripod with the antenna and connect it to a power source and the router. It “searches” for the nearest satellites and automatically orientates itself.

Will we have Starlink in Brazil?

Everything indicates that it is. At the end of 2020 SpaceX registered two companies in our country to control a local operation. One is Starlink Brazil Serviços de Internet Ltda. (CNPJ 40.154.884 / 0001-53), which was registered on December 18 with a capital of R $ 800 thousand (just under US $ 150 thousand). The main activity is “satellite telecommunications”.

It remains to be seen when the service will be officially available. The beta is currently only serving consumers in the US, UK and Canada, but users from anywhere in the world can register. 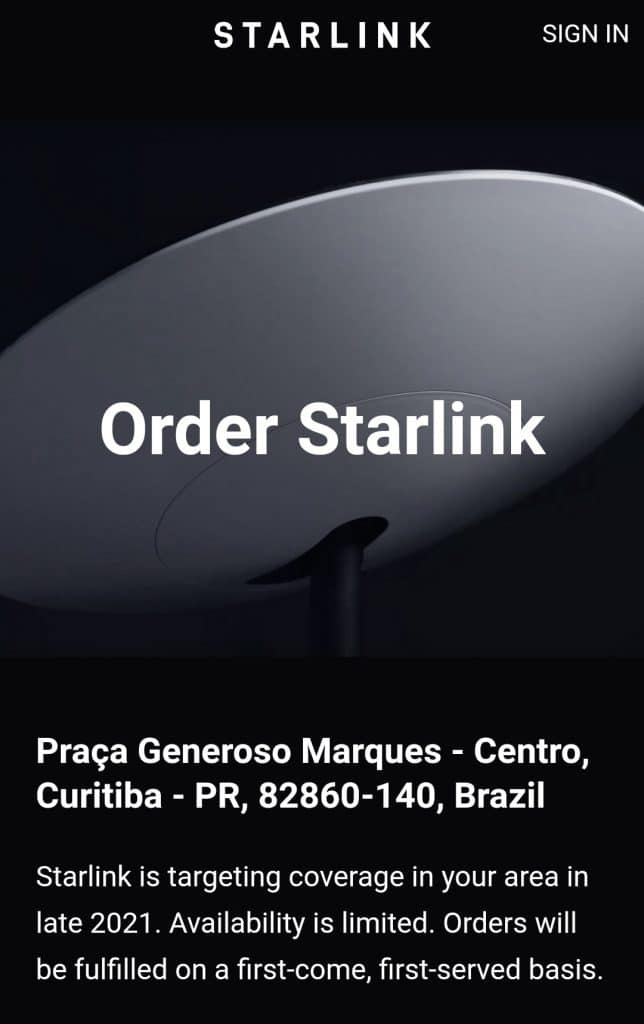 Request for access to Starlink with an address in Brazil, showing the promise of availability later this year.

When we tested with an address in Curitiba, we saw a message saying that Starlink expects to offer coverage in the region “at the end of 2021”. But a notice on the website says that a reservation “is not a guarantee of service”, and that orders can take “six months or more to be fulfilled”.

Scientists report case of baby with three penises for the first ...