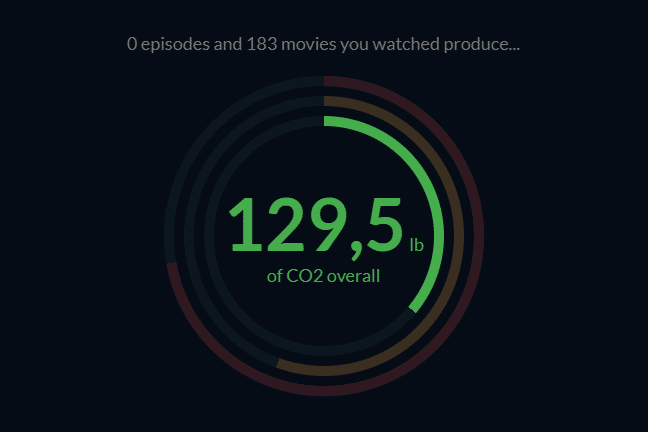 See how many kilograms of CO2 your Netflix account has emitted

Yes, streaming services are able to emit CO2. According to researchers from The Shift Project, online video playback around the world is responsible for the broadcast of more than 300 millions of tons de carbon dioxide per year, representing 1% of the complete annual value.

Thinking about it, the platform Just Watch launched a carbon dioxide emission calculator. Now, it is possible, based on your viewing history of Netflix, get the exact number of CO2 that you expelled into the atmosphere.

To use it, you must download your CVS Netflix history and go up on the Just Watch platform.

I used my history for the test, and according to the results, in the last year I was responsible for contributing to the emission of 129,5 lb of CO2, or 58,74 kg. After obtaining the result, the tool also shows a comparison of your load with other routine activities:

According to my quantity, the same percentage can be obtained by watching more than 667 hours on television, using the cell phone for more than 226 hours, cooking more than 117 steaks, making more than 2.600 toasts, among others.

And finally, the user still receives guidance to decrease their number. Mine were very clear:

I should opt for more renewable energy sources and also ask Netflix to do the same.

Take your test here, and check the results.

Netflix has already commented on the CO2 emission

Considering the wave of sustainability adopted in other big bigtechs, Netflix started to disclose its “Emission Zero + Nature” plan

According to the company, by the end of 2022, the strategy adopted will be to zero net greenhouse gas emissions, which will be achieved by reducing internal emissions "at the level of 1,5 ºC in line with climate science. and then we will invest in external projects around the world that remove carbon from the atmosphere, such as protecting forests, including underwater ones ”.

The company emitted more than 1 tonne of carbon dioxide into the atmosphere.

8 Questions You Should Ask About Possible New Flu Season

Starlink satellites are seen over Brazil

'Berserk': everything you need to know about Kentaro Miura's main work