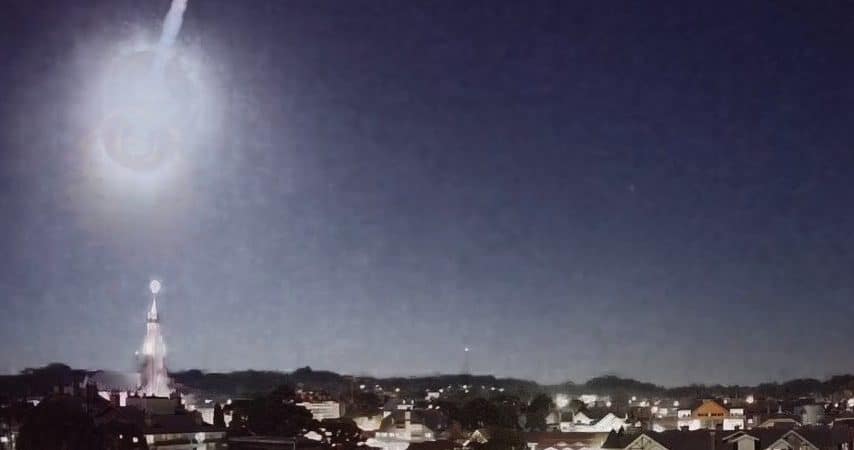 a big meteor turned night into day on the coast of Rio Grande do Sul in the early evening of this Thursday (3) and was recorded by cameras of the BRAMON, the Brazilian Meteorological Observation Network, and Live Climate in Rio Grande do Sul and Santa Catarina.

O phenomenon was registered at 19:09 pm (local time) by camera 2 at JJS station in Monte Castelo, SC, managed by Jocimar Justino, by several cameras at CFJ station and Heller & Jung Observatory, in Taquara, RS, managed by Carlos Jung, and by FCB1 station in Campo Bom, RS, which has just been implemented and is managed by Fabiano Fetter. In addition, it was also registered by 4 Live Climate Cameras in Rio Grande do Sul and one in Santa Catarina.

Check out the videos:

Several reports have already been sent through social media and the reporting tool bramon.imo.net. And according to reports, in some places the meteor's glow was so intense that, for a moment, it turned night into day. This clarity can be seen in the video that was recorded by the camera at the Heller & Jung Observatory at Balneário Jardim do Eden, RS.

From the triangulation of the images captured by the cameras, BRAMON determined the meteor's trajectory. It hit the atmosphere of Land at an angle of 57,3°, in relation to the ground, and began to glow at 75,9 km altitude, 28 km east of Balneário Pinhal, RS. It continued at 58,9 km/h in the northwest direction, covering 58,1 km in 3,6 seconds, and disappeared at 27 km of altitude, 4 km off the coast of Tramandaí, RS.

The fireball in its most luminous moment reached the magnitude -12.5, equivalent to the brightness of a Moon Full. From the initial analyses, BRAMON concluded that the bolide was generated by a fragment of space rock of approximately 25 cm and 33 kg in mass, which was, in large part, vaporized during the passage. atmospheric. It is possible that something around 10% of this mass has resisted and reached the ground in Tramandaí, RS.

Have you watched our new videos on the UAF YouTube-channel? Subscribe to our channel!

Black fungus: cost for treatment of mucormycosis may exceed R$ 450 with medicines alone