We do Olhar Digital and our partners use cookies, localStorage and other similar technologies to customize content, ads, social media features, traffic analytics, and improve your experience on this site in accordance with our Terms of Use and Privacy. By continuing to browse, you agree to these conditions.
Olhar Digital > Videos > Direct measurement : Samsung tests “stretchable” Oled screen to apply to users' skin 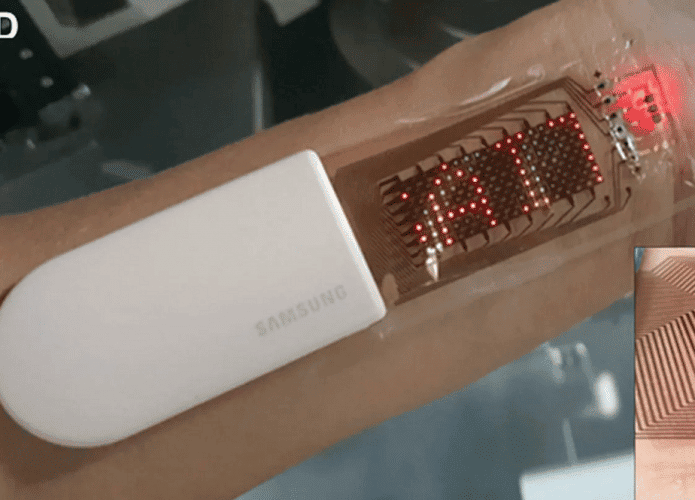 Anyone who is used to physical exercise understands well how it is sometimes difficult to wear a smartwatch on your wrist for some activities. This nuisance may no longer exist: a Samsung developed a screen OLED which is basically a skin patch and can work as a fitness tracker.

The flexible display was created by researchers at the Samsung Advanced Institute of Technology. The extendable OLED can be attached to the wrist to provide users' fitness information. The screen is integrated with a PPG heart rate sensor.

The OLED, in the test, remained reliable even with skin stretching up to 30%.

The display also keeps working stably even after being stretched a thousand times. In addition to physical exercise, the patch can be used to measure biometric data during sleep and there is no need to connect to another device to view the information.

To arrive at this OLED screen, the Samsung team of researchers modified the composition and structure of the elastomer, composed of polymer, and used existing semiconductor manufacturing processes.

The South Korean company claims that this technology is the first in the industry, and that it can also be used in various applications such as wearable devices.

The developers claim that the tech will be sold when it has a higher resolution of the system, with elasticity and accuracy of measurement, and the possibility of mass production.

BMW brings the concept of luxury, 100% recyclable and made of sustainable materials: i Vision Circular

Rocket mounted with 3D printing to be released in 2024

'Ring of fire': find out how to follow the solar eclipse that takes place this Thursday (10)