We do Olhar Digital and our partners use cookies, localStorage and other similar technologies to customize content, ads, social media features, traffic analytics, and improve your experience on this site in accordance with our Terms of Use and Privacy. By continuing to browse, you agree to these conditions.
Olhar Digital > Videos > Outright success: Blue Origin performs first spaceflight in a pilotless rocket 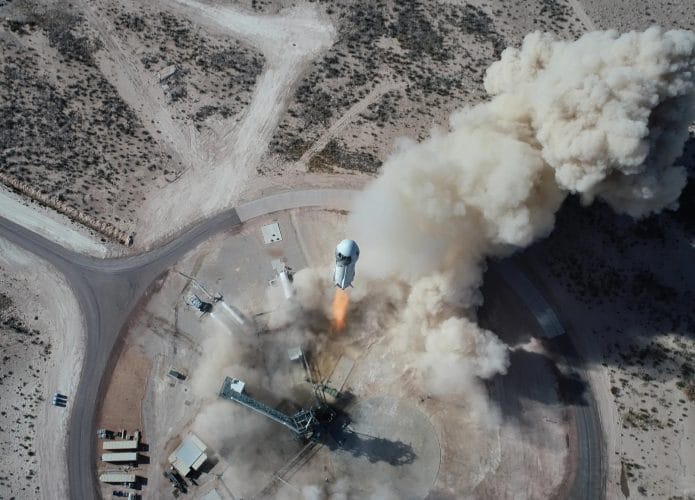 Blue Origin's first suborbital flight was a complete success. The company's CEO, accompanied by his brother and two others passengers performed a adventure at more than a hundred thousand meters of altitude!!

But the historic start of the day was recorded even before the sun appeared at Blue Origin's base in Texas. That's when the first images of the rocket and the New Shepard capsule in launch position appeared.

While the crew prepared, the technicians carried out the last checks of the equipment.

With 45 minutes to go, Jeff Bezos, his brother Mark, veteran US Air Force pilot Wally Funk and physics student Oliver Daemen left to hitch a ride in electric SUVs from startup Rivian. Before leaving Amazon's presidency, Bezos ordered XNUMX vehicles from that company to make deliveries for the e-commerce giant.

From that moment on, the emotion only grew. An interesting detail is that the crew did not have an elevator waiting in the platform Of launching. Everyone climbed the stairs, which by the way is one of the requirements for all future passengers of Blue Origin: to overcome the stairs in up to 90 seconds, thus showing the necessary physical preparation to face the G forces inside the capsule. Wally Funk, 82 years old, won the challenge with ease. Another curiosity is about the youngest crew member, Oliver Daemen. He was second in the auction Blue Origin's first paid ticket, but the person who won the dispute and paid $28 million decided not to travel. This person was not identified, and the reason for the withdrawal was explained as a scheduling conflict.

After a few moments inside a waiting room, the four finally settled inside New Shepard. With just over 18 minutes to go, the door was closed… This mission also marks the first manned trip to space without the presence of a pilot. The rocket was fully controlled by the team in land.

Two minutes to launch, and the boarding platform was retracted by the tower.

And then came the final count:

One minute after launch, the MAX Q warning is given, which represents the maximum aerodynamic pressure faced by the rocket… the thrusters use liquid oxygen, which makes this rocket environmentally friendly.

With just over 2 and a half minutes of travel, they arrived at the zero gravity, still on the way up… inside the capsule, the crew unfastened their seat belts.

The emotion of the four was evident. They hardly knew whether to take advantage of the incredible scenery thanks to the large windows, or to do pirouettes. A rubber ball appeared, and Jeff Bezos also took some candy…
In the middle of the game, the Bezos brothers showed that they had a message written on their palms, saying "Hi Mom!"
Zero gravity lasted for about 3 minutes.

After the rocket disconnected, the capsule continued its ascent to a maximum point of 107 kilometers above sea level. They thus crossed the so-called Karman line, which establishes the boundary of space.

The rocket's descent was perfect. Controlled and smooth, it only left the imprint of the thrusters in the landing area.

Meanwhile, the capsule was still descending, at over 320 miles per hour. But when the 3 gigantic parachutes were deployed, the fall began to happen at a smooth 25 kilometers per hour. Even so, a final jet eased ground contact.

The four still took a few minutes to get out of the capsule and receive many hugs.

At a press conference shortly thereafter, they received a “decoration” commemorating the trip, and everyone was able to talk about the experience. The liveliest was without a doubt now astronaut Wally Funk, who delivered the most emotional speech. She said she had waited a long time for this moment, and when she saw the darkness of space she felt great! He thanked Jeff Bezos and said he wants to go again, fast!