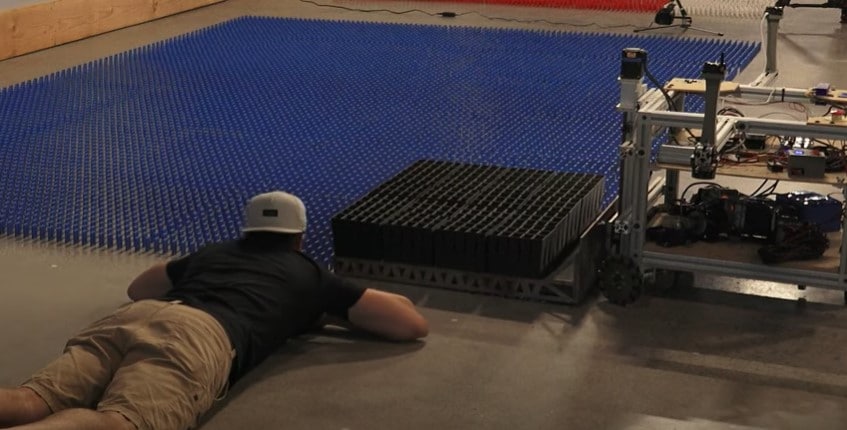 A robot created by the engineer and youtuber Mark Robert organized a themed mural for the games classic Super Mario Bros. in just over 24 hours. The time is impressive because the mural has no less than 100.000 pieces, an amount that would be a lot of work for humans, since a team of seven people would take a week to do the same thing.

The robot, which was dubbed “Dominator”, set up the mural dropping 300 dominoes at a time, which are carried on it by another robot. According to Rober, the current version of Dominator is the culmination of years of work by him and his team. In the video that shows the mural assembly, youtuber also shows how the device works and others failed designs before the final product.

Rober and his team received help from domino artist and youtuber Lily Hevesh, who also acted as a human opponent for Dominator. The video of Hevesh putting together a similar mural, also in honor of Super Mario Bros., was published in her YouTube channel and shows the skill needed to build a mural with dominoes.

In the video where he shows the montage of the mural, Robert briefly shows the construction process of the robot, but all the steps were shared in posts written by the team over the years. The posts show everything from the idea of ​​the project, to the assembled and operating robot, passing through the prototype and how the hardware and software operate.

Although it is not a robot with practical functions for the market, such as carrying out household tasks or delivering products, what would our life be without art, isn't it? And nothing better to show us what an artist robot that stacks dominoes can do than a gigantic mural with one of the most beloved characters in games.

With information from The Verge

Google and Facebook will require vaccinations for internal employees