We do Olhar Digital and our partners use cookies, localStorage and other similar technologies to customize content, ads, social media features, traffic analytics, and improve your experience on this site in accordance with our Terms of Use and Privacy. By continuing to browse, you agree to these conditions.
Olhar Digital > Videos > Killer cubes will riot in chapter 2 of the new Fortnite season 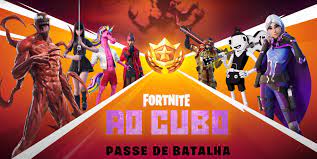 A epic Games announced all the new features of 'Ao Cubo', Chapter 2 of Season 8 of 'Fortnite'. The season is available until December 5th and brings several news and one more Battle Pass.

And also the villain Carnificina, from the publisher Marvel Comics and the second film in the 'Venom' franchise, will be offered as a maximum reward.

The biggest highlight of the new season of 'Fortnite' is the modification of the map, which is now much more active and dangerous. The name “the Cube” refers to Kevin's cubes that are scattered throughout the scene. According to story details, the items dropped from alien ships at the end of last season.

Items may also have other modifications not yet revealed by Epic Games. In addition, the map reserves space for ships that have fallen and are now destroyed.

Another addition to the game are the displacement tunnels throughout, which allow you to make characters fly quickly from one end to the other in certain locations. Monsters can also roam the cubes!

The season premiered on Xbox, PlayStation and Nintendo Switch consoles, as well as PC and Android.

For more information about Chapter 2 of Season 8 of 'Fortnite', check out our portal Olhardigital.com.br and good game!

All about the Red Planet: Human Conference for Mars 2021 runs through 15/09

All about the Red Planet: Human Conference for Mars 2021 runs through 15/09